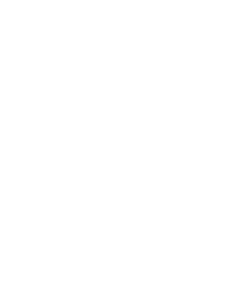 The Synagogue of Water was discovered by the Entrepreneur Fernando Crespo during building works carried out in several real estate properties located in the heart of the historic centre of Ubeda. The original idea of the project was to transform the old property into apartments, shops and car parks. After the discovery of various elements such as the arches of the Synagogue, The Women’s Gallery and the Ritual Bath (Mikveh), the initial project was abandoned. The recovery of this place began in 2007 and from 27 February, 2010 it has been open to the public. Based on the existing research, we can speak of a synagogue before the fourteenth century. 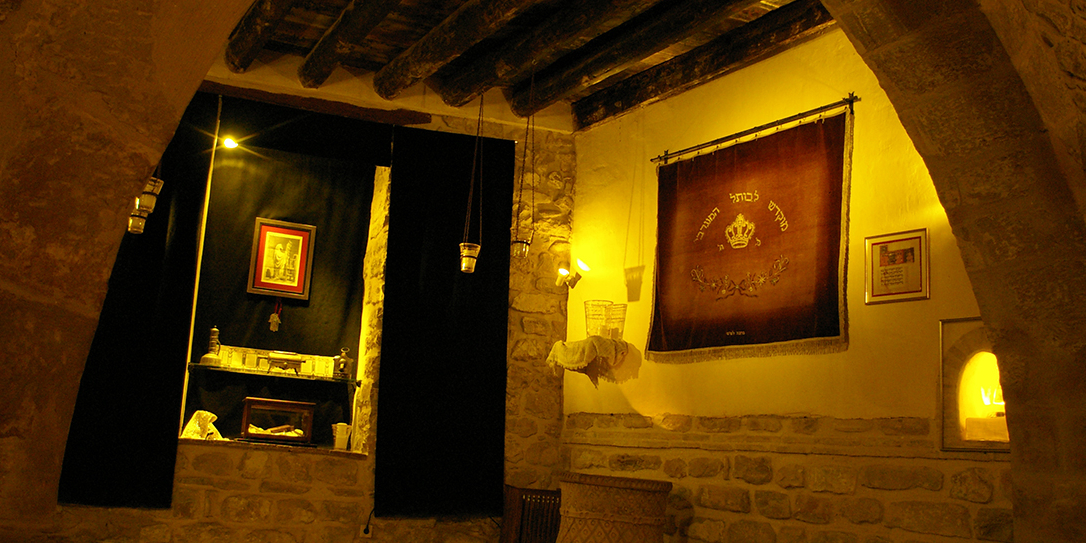 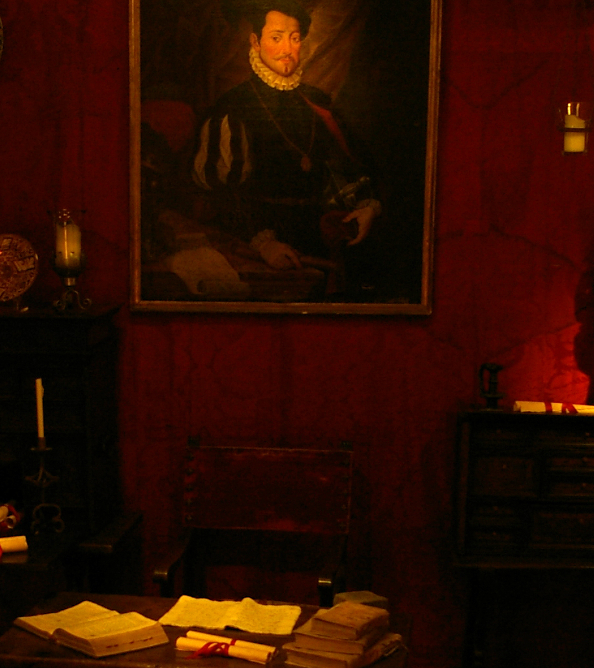 The name of this first room is due to the close resemblance that this building has to a house which is historically is known as “The House of the Inquisitor” and in its facade, preserves the coat of arms of the Holy Office. (Calle Las Parras No. 8). It is possible that the intention of the representative of the Inquisition in the town (perhaps a converted Jew) was to preserve and protect this place instead of destroying it.
This room – together with the courtyard, the cellar and the ovens – corresponds with the possible house of the rabbi in the Middle Ages. 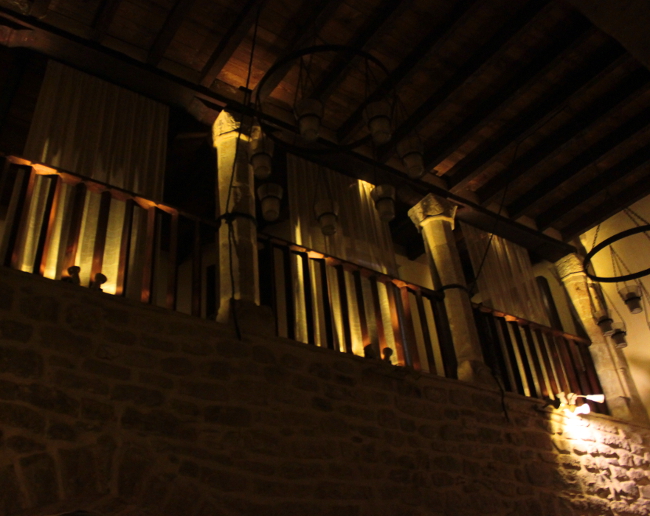 Noteworthy are the four original columns above the left arcade that form an important part of the synagogue, „The Women’s Gallery” – the place that is occupied by women during ceremonies and rituals. This place is hidden behind shutters. 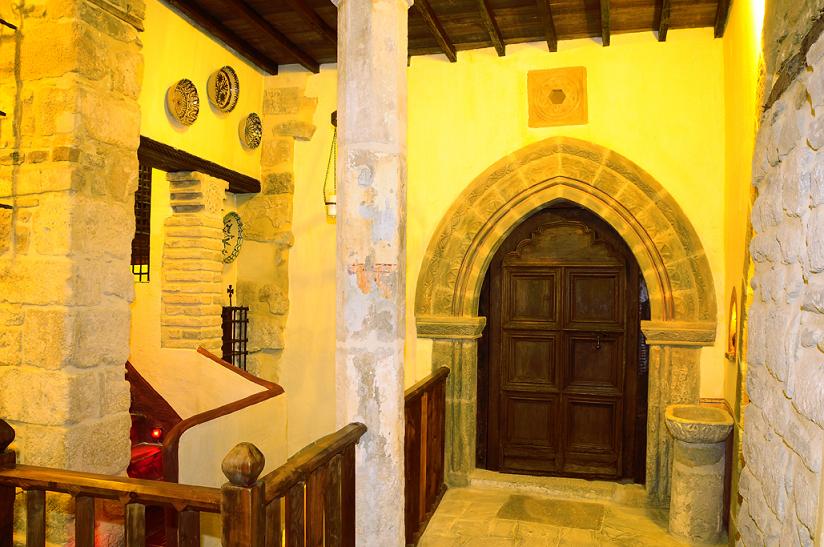 The arcaded courtyard divides the main sections of the entrance to the Synagogue. The most representative pieces of this room are two of the complete and original columns that appear within it. These are well-defined columns with patterns of palm leaves or “the tree of life” with its seven branches symbolising the Jewish Menorah by the capitals.
The other important element of the patio is the entrance to the Synagogue. It is called Puerta del Alma. The columns, steps and several of the segments forming the arch are original. Other parts are replicas because some of the originals have been found embedded in various walls dividing the different rooms (see the voussoir at the reception). Above „La Puerta del Alma” is a stone representing the Star of David. 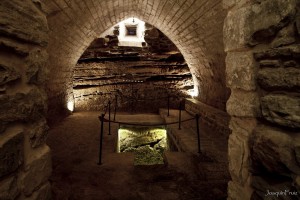 This can be accessed via a narrow passageway that has been excavated into rock. Hidden in what was thought to be an old cellar, between debris, appears to be a purification ritual bath or Mikveh. For all religions, water is a fundamental symbol of spiritual purification. Muslims, Jews and Christians purify themselves before entering temples and shrines. In the case of the Jewish community, men used to go to the purification bath on Fridays and before the important festivities. Women would go before marriage, after childbirth and after finishing menstruation. The baths were shared and the whole body would be submerged in the purifying water of the Mikveh. The bath is covered by a modest pointed vault of fine masonry. In the centre there is a hole with steps dug out from the rock where the water springs naturally and continuously. Both conditions are essential in understanding its meaning, significance and purpose. 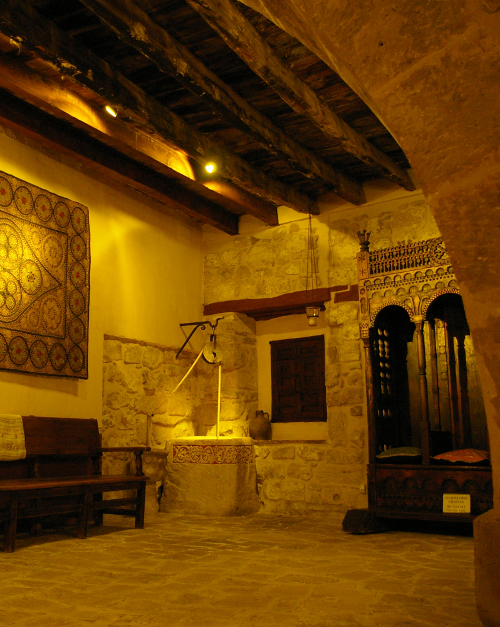 This is a large room split into three naves separated by original pointed arches, which remained embedded and hidden in the walls of houses. The spaces have a structure of medieval Spanish synagogues – small rooms below street level with austere building materials. Synagogues are not only fundamental meeting places designed for prayer and worship but also for meetings and decision-making of the Jewish community as well as studying, reading and judgements -always led by the rabbi and the elders of the community.
Noteworthy are the four original columns above the left arcade that form an important part of the synagogue, „The Women’s Gallery” – the place that is occupied by women during ceremonies and rituals. This place is hidden behind shutters.
Other important elements of the room are the authentic wooden ceiling with paintings. There are seven wells in total which helps us to understand how important the presence of underground water is when building synagogues. Two of them still contain water and have their original rim. 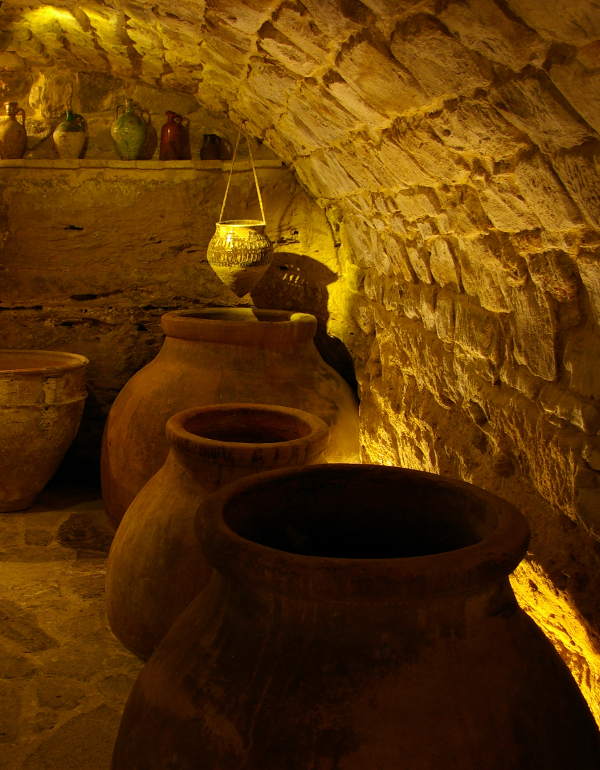 This is one of the rooms that formed a part of the possible house of the rabbi. It contains a lowered barrel vault and floor and authentic half-buried jars. They were used to store olive oil and kosher wine as well as various foods suitable for the Jewish religion.

Next to the cellar is a space excavated into the rock with a flat roof which, judging by its condition and by the excavated hol es, seems to be a kitchen and ovens used to make unleavened bread and to keep the food warm for Shabbat. 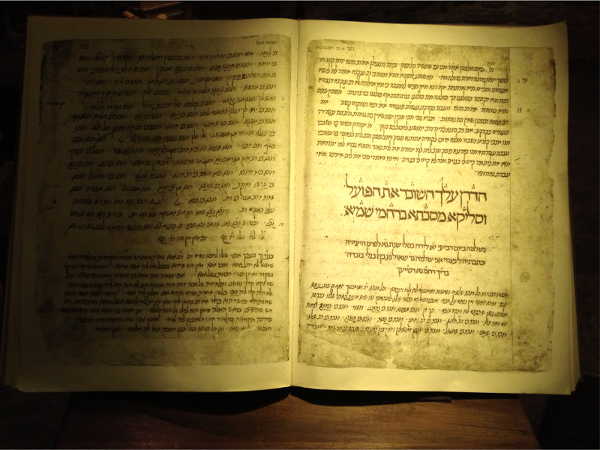 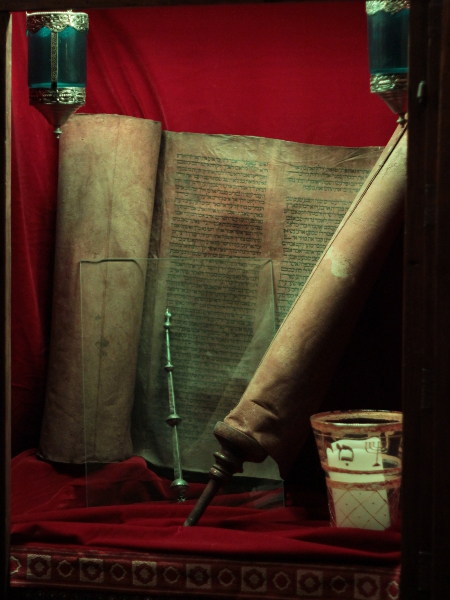 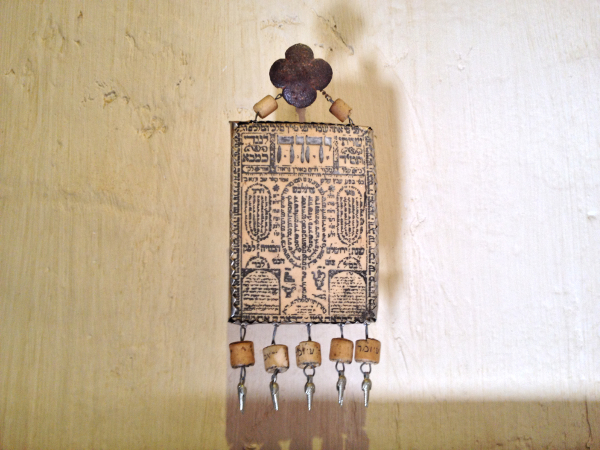 The Kabbalah (Jewish Qabbalah, ‘to receive’) is a discipline and school of Jewish esoteric thinking. lt uses various methods, more or less arbitrarily, to analyse hidden meanings of the Torah (the holy Jewish text, which Christians call the Pentateuch, and which represents the first five books of the Christian Bible). 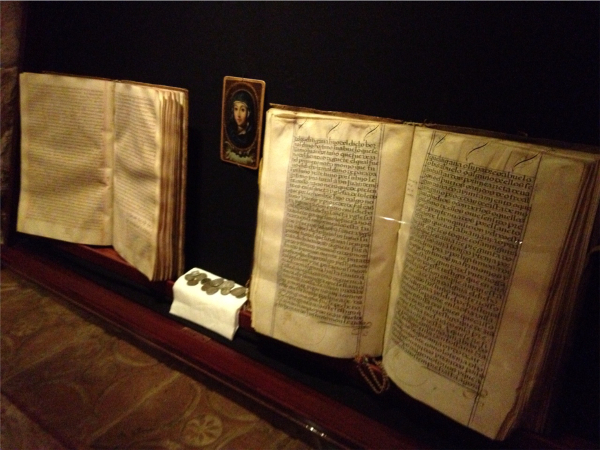 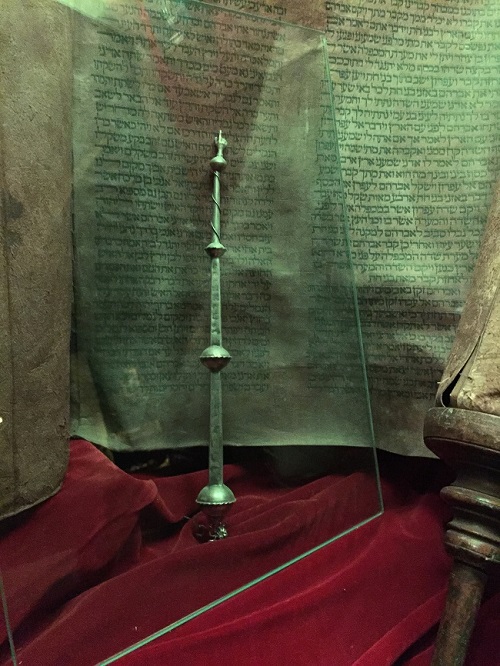 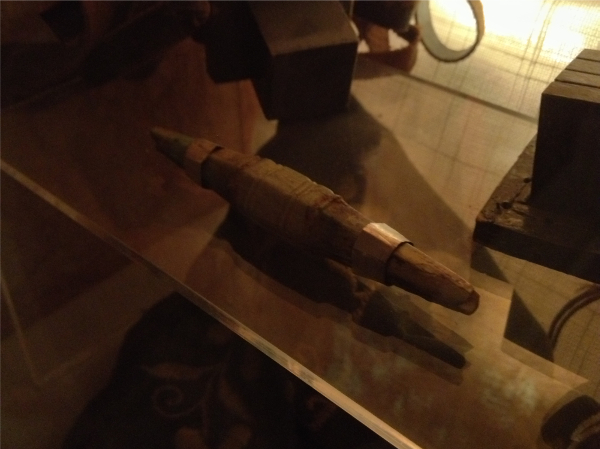 This is the symbol that identifies a Jewish house. It consists of a small tube or box of various materials (wood, silver, ivory etc.) which contains different prayers written on a ,,klaf“‘. It is placed on the right-hand side of the entrance to Jewish homes and Jewish places and tilted diagonally to one side. This is a rule specified in the Bible, Deuteronomy (Devarim) VI, verses 4 to 9 and chapter XI, verses 13 to 21, where it says My words have to be written on the entrance of your house and your cities “. There is a custom regarding the Mezuzah that occurs when a Jew leaves or returns home. He places his hand over the Mezuzah and says, “God will look after my departure and my return, now and forever.” 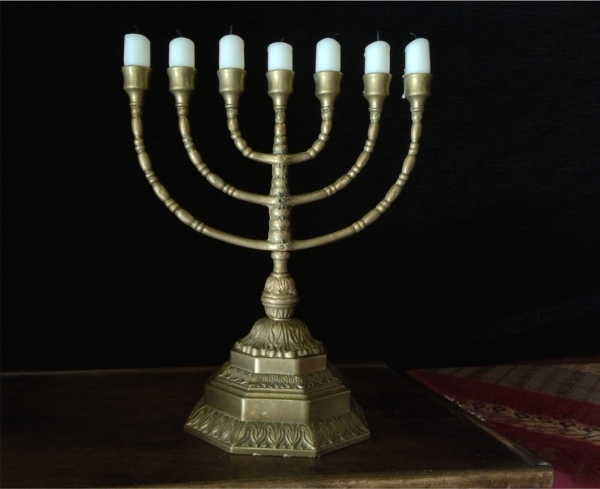 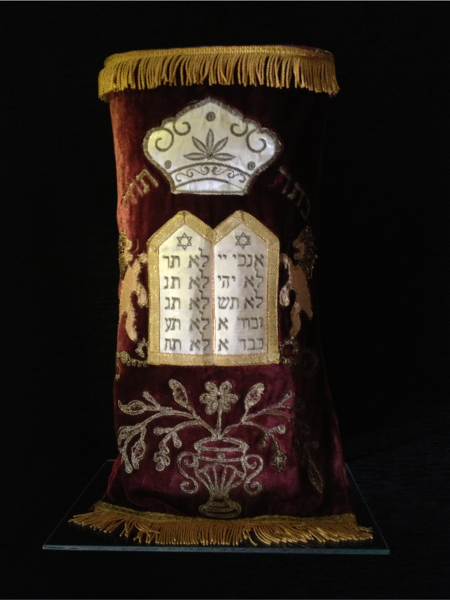 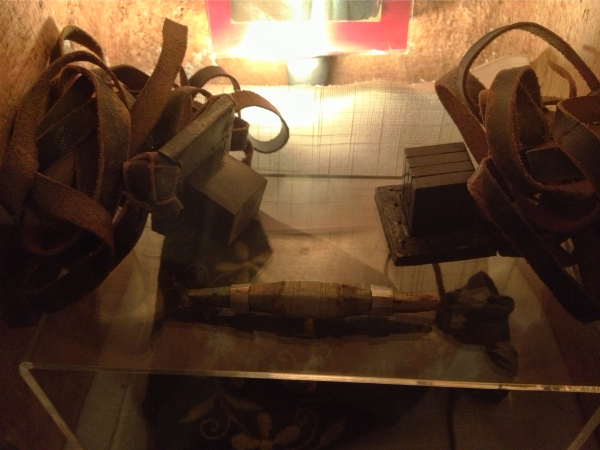 This is one of the oldest symbols of Judaism. It consists of two leather cubes that contain four fragments of the Torah and a leather cord or ribbon with which to hold them, one on the left arm and the other wrapped around the head. Following their Bar Mitzvah, males use the phylacteries to pray on weekday mornings (Shacharit). They are written on by a scribe. The skin used for the leather boxes and the cord or ribbon must come from a pure (kosher) animal, as with the Klaf. The phylacteries are revised every seven years to make sure they remain appropriate and to ensure they have not been damaged or the letters erased.. 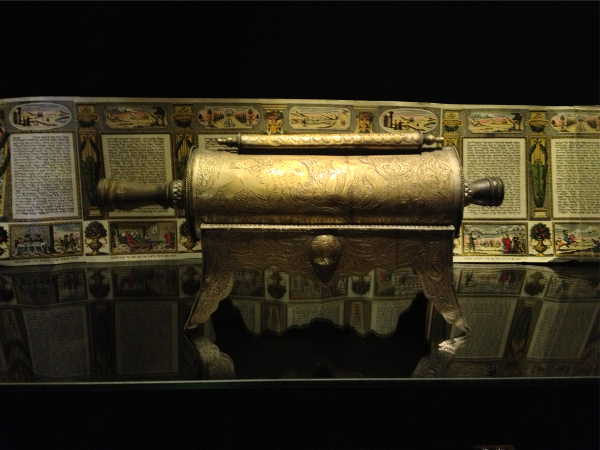 The Scroll of Esther and gragger – The feast of Purim is a Jewish holiday that is celebrated annually on the 14th of the Jewish month 0fAdar (February-March) in order to commemorate the miracle recounted in the Book of Esther. During this month, Jews were saved from extermination under the rule of the Persian King Ahasuerus, identified by some historians as Xerxes I, around 450 B.C.

In spite of the fact that Purim is considered one of the happiest days in the Jewish calendar, Jews are required to fast and pray the day before, in memory of the Persian Jews who fasted to save themselves from an imminent conflict, which could have led to their extermination by Haman and his followers in the army of the Persian Empire.

During Purim they read the Megillah Scroll /“The Book of Esther.” This reading is performed at high speed and the listeners must make noise with graggers or other objects every time the name of Hamanis is read, so as not to hear the name. This makes it possible for children to be involved in the reading. 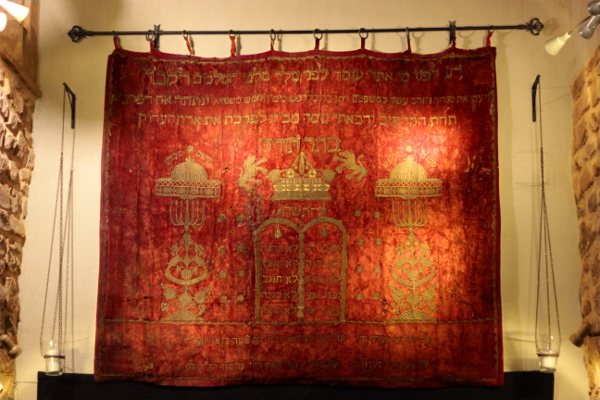 This is a richly decorated veil or curtain covering the hole or niche where the holy books known as Aron Kodesh (Holy Ark) are stored. 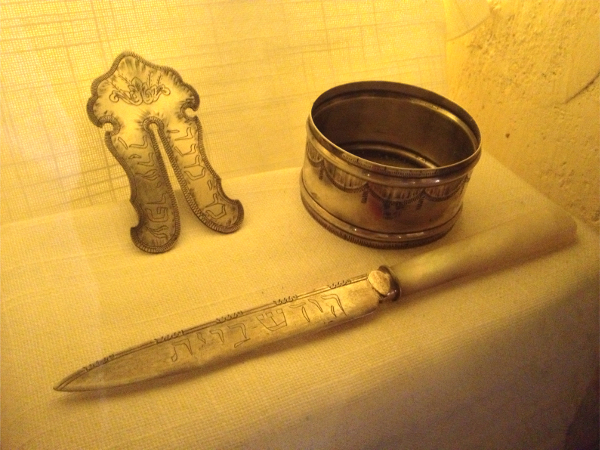 Circumcision is the first commandment given by God to Abraham, the first Jew, and is a central part of Judaism. The ritual takes place in the synagogue on the eighth day of birth, at which time the child is formally given his name.